On a cooling yet rainy morning in Hong Kong, 20 thousand glasses were placed in a big banquet hall, with 14 hundred bottles of unreleased top-quality Bordeaux wines uncorked by 45 Hong Kong sommeliers. The banquet hall was fully packed by winery representatives from all over the world, wine critics, wine sellers, buyers, educators and media. And they awaited the arrival of a very experienced wine critic, if not, the most influential wine critic for red Bordeaux in the world, to lead a tasting session where the 2009 Bordeaux vintages were first unveiled to the public. I was lucky enough to be part of it as an amateur to wine, it was a great lecture that I had.

The Evolution of Bordeaux

The crowd applauded before Mr. Robert Parker spoke. On this very day of November, Robert Parker chose and ‘brought’ 20 Bordeaux red from the 2009 vintage and named it “the Magical 20”. Before his Midas touch on 20 outstanding wines in the 2009 vintage, he started off by discussing the revolution of Bordeaux wines.

“When I look back the 33 years, I ask myself why has Bordeaux stood up so strongly in the world of wine. We have seen this proliferation of quality of wine throughout the world… This [the development of wine in Bordeaux] is all taken place in a short 30 years. There’s a reason why Bordeaux is Bordeaux. As much as we love Garnacha from Spain and Malbec from Argentina, or Cabernet Sauvignon in Napa Valley, no one would produce wine today, who doesn’t produce wine without comparing what they are doing with what Bordeaux does. Bordeaux is the reference, it is where wine knowledge starts and ends.”

Mr. Parker recalled his first taste of Bordeaux back then in 1978. Obviously, the 1970s were never an impressive vintages for red Bordeaux. But Mr. Parker started to witness the change in early 1980s. He explained that the revolution in Bordeaux started 20-25 years ago and it first started with the vineyards. He started to see vineyards being replanted, then emphasis on lower crop yields were promoted, vineyard started moving into organic farming principles. An impressive and critical change was the technique of reducing of crop size to enhance the concentration of grapes. It was first started by Petrus when local farmers at that time considered such method as an act against the god. What’s more is that, with the rise of second and third wines, it ensures that the top wines are produced with top-quality grapes. 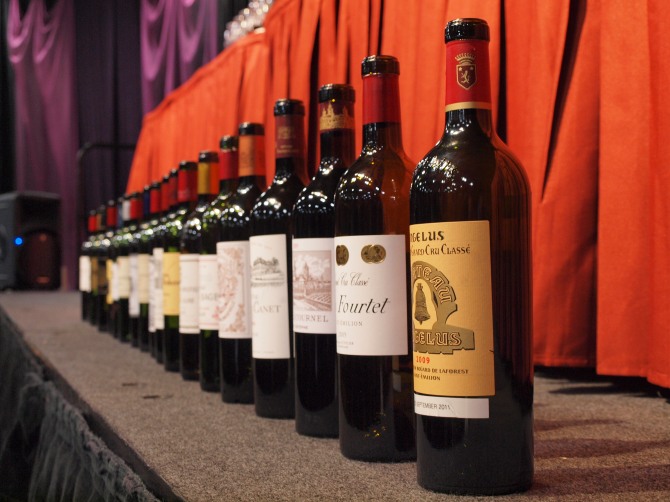 “I think it has been one of the greatest vintage in my life time,” Robert Parker says.

Since 2010, the 2009 Bordeaux vintage was rumored to be the most outstanding vintage in the 2000s. I recalled winemakers from the grand cru chateaus telling me that I should look forward to the 2009 vintage when I attended the horizontal grand cru tasting for the 2008 vintage earlier this year. And this is how Robert Parker commented on the 2009 vintage today:

“One of the things that I have learnt in 33 years, of tasting Bordeaux, there are generally two types of great vintages in Bordeaux. There’s a kind of vintages that is very opulent, and exuberant, and sumptuous, and really even when in its youth, it’s very impressive, and we almost feels like you can drink it from the barrel. These vintages are rare, and there vintages in the past like 1921, 1929, 1947, 1949, 1959, and more recently one 1982, 1990, 2003 to a certain extent, but certainly 2009 is in the school of great vintages that are drinkable young… it also have the window for drinking them, it’s a very very broad window. The other style that bordeaux produces is a more …masculine, more powerful and robust and with more tannins, very dense very concentrated but also backward and foreboding and almost difficult to understand when they were young. There are big wine, rich wines, whether extremely tannic, and they take time to unveil, unlike vintages like 2009 or 1990 or 1982 when the window for drinking starts at the beginning than those like this.”

In between the tasting, Mr. Parker also commented on the tannins in modern vintages. As much as I disliked tannic wines, I tried my best to understand what he is trying to convey. I personally think that tannins in the 2009 are in general gentler than the 2008 vintage, and surprisingly, I found a few Margaux that I actually liked in the selection which includes Chateau Rauzan-Segla.

“I am sure some people would say: Are the tannins in these wines too soft? Because we are so used to wines where tannins has a bite to them. This is one of the great qualitative improvements that has been made in vinification in Bordeaux is that the tannins levels in Bordeaux in modern days are as high, if not higher than it has ever been, but because of the quality of the wines have been vinified, because they are using fully mature fruit, the tannins are sweeter, they not aggressive as they used to be in the past…I remember in my earlier days as a wine taster, I was troubled over the vintage that I was tasting… because the wine seemed too tannic, bitter, hard and green, I was talking to this old vineyard owner, and I said I had a hard time understanding this vintage and he looked at me, put his hand on my shoulder as if he was talking to his child, and he said, as a wine critic, sooner or later you would have to understand… if the wine taste too tannic, it IS too tannic. That simplicity is something that you should never forget. Tannins are always in this wine, there’s never a Bordeaux made ever that doesn’t have plenty of tannins. But the old style Bordeaux, because the tannins were too bitter, they were too tannic. You have much more tannins [in the new vintages] than in the great old vintages, but tannins were softer and sweeter, so tannins were there… but the tannins were silky.”

1. Wine has to satisfy your hedonistic and intellectual sense, i.e. sense of pleasure and senses of intellectual where wines are like an onion that you are peeling, where every time you go back to the glass, more things come out and unfolds, showing you more things that are positive.

2. All great wines has to offer a depth and intensity of aroma and flavor without heaviness.

3. Ability of the wine to hold your interest

4. Ability to improve with age

5. A wine has to have a singular personality

[Q]: Who am I?
[a]: a foodie from the bustle Hong Kong, who is learning to appreciate food within and without the city.
[Q]: Any food preferences?
[a]: I love Japanese, French and Chinese cuisines in particular. But I appreciate anything that is fine and prepared with passion.
[Q]: What's about this blog?
[a]: fine dining, fine wine, and anything fine. For local and casual dining, please follow my Instagram - katiekeikot