Now where are the pictures? So it turns out photos were not allowed to be taken in the restaurant.

“Our boss doesn’t want any kind of promotion,” says the chef. 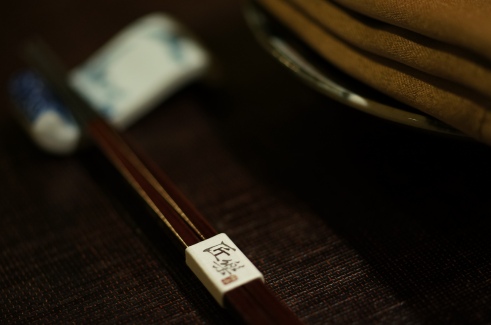 That statement stunned me. Even well known three-starred restaurants are eager to have their reviews blogged about, and yet this small restaurant did the unthinkable – to reject any kind of media coverage.

“We want our diners to concentrate on the food, and it’s a decision made during the September shareholder meeting,” adds the chef.

To be honest I wasn’t very happy with the ‘no photo’ arrangement even though they politely declined my photo request. I decided to respect their policy and put my camera away, thinking that this meal has to be real good to compensate.

Jiangle is Taiwanese-run. It’s too well-hidden in a quiet alley, that it took me 15 minutes to locate it.

The Taiwanese chef speaks fluent Japanese. He acquired his sushi-making skills in Tokyo, but his style was a distinctively different from the traditional edo-style nigiri sushi.

“A lot of nigiri sushi evolved from the traditional edo-style, but my teacher’s methods doesn’t fall into this system,” said the chef.

During the meal, I noticed plenty of Japanese and gourmets are frequent diners at Jiangle. Their hand pressed sushi is definitely one-of-its kind. The sheen of the lump of rice – almost glutinously packed together on the outside – fall apart like waffle biscuits in the mouth.

Jiangle is not only about sushi, it has included some kaiseki elements. The meal started with a fish liver appetizer, served with Japanese ginger, lime and soy sauce. Another dish was stewed langoustine with Daikon (turnip) from Kyoto, mushrooms and chestnuts.

The omakase dinner set me back 3500+$NTD. I had a glass of Choya plum wine, and the total came to 4,136$NTD. I picked the more expensive omakase meal, and there are slightly cheaper options. Overall, the food was great and their staff were friendly and helpful. I wouldn’t be surprised if it’s one of the best sushi place in Taipei.

[Q]: Who am I?
[a]: a foodie from the bustle Hong Kong, who is learning to appreciate food within and without the city.
[Q]: Any food preferences?
[a]: I love Japanese, French and Chinese cuisines in particular. But I appreciate anything that is fine and prepared with passion.
[Q]: What's about this blog?
[a]: fine dining, fine wine, and anything fine. For local and casual dining, please follow my Instagram - katiekeikot